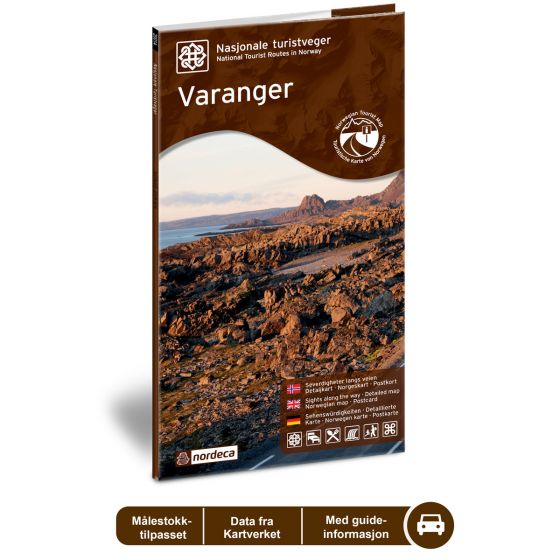 Details
Description
The Varanger National Route follows Varangerfjord and the coast of the Barents Sea. From sheltered birch forests and marshes across the moors to rugged cliffs and dramatic moon-like landscape, the route offers a journey of contrasts in nature in an Arctic climate. The weather of the Arctic zone is an experience in itself. In summer, the heat from Siberian regions may suddenly be replaced by icy fog from the sea, and in winter there are violent storms along the coast. At certain times of the year in this Arctic zone, you may experience four seasons in a single day. Varanger is one of Northern Europe’s largest bird areas. Fishing, migration and trade has made Varanger an Arctic melting pot of nationalities and cultures. With its proximity to Russia with Pomor trade, Finnish immigration and Sami traditions, the area is fascinating in its cultural diversity. The Varanger National Tourist Route (County Road 75/341) between Varangerbotn and Hamningberg is 160 km long. The route can be combined with a voyage on Hurtigruten and a drive along Havøysund National Tourist Route to compose one of Norway's most beautiful round trips.
Overview map
More about the series
National Scenic Routes
This map series will enable some wonderful experiences along the selected routes.
The maps indicate spectacular views, nature experiences, attractions, architecture, dining spots, overnight accommodations and places of interest. These are described in the map with text and photos.
The maps have been designed in cooperation with the Norwegian Public Roads Administration.