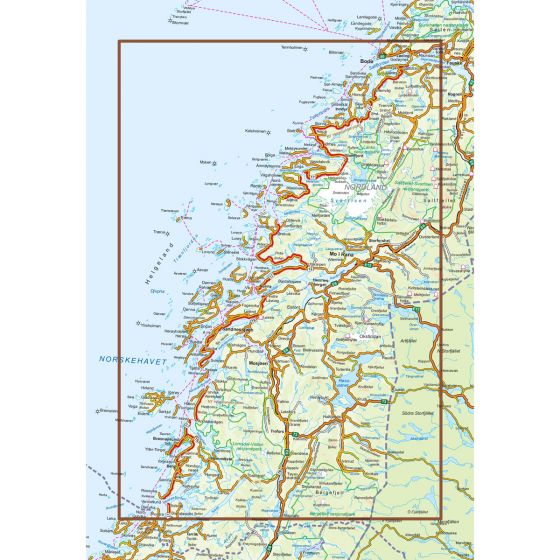 Details
Description
The Helgeland Coast National Tourist Route is connected by six ferry routes and offers a drive full of contrasts, with a lush cultural landscape, alpine peaks, glaciers, coastal areas and ocean currents. Along the tourist route are many unique natural phenomena. You will pass Torghatten with its distinctive hole, the Seven Sisters mountains in the south, and Saltstraumen, with the world’s strongest tidal currents in the north. The Helgeland Coast has a unique archipelago, with more than 14,000 islands and islets. Long fjord arms break up the coastline, and in the innermost part of the fjords there is an industrial community based on hydroelectric power production. Fishing and agriculture are traditional livelihoods along the coast and out on the islands. From the national tourist road, there several ferry routes out to the larger islands, from the World Heritage Site of Vega in the south to Sørarnøy in Gildeskål in the north. There are also express ferry routes that connect the islands and mainland. This offers many opportunities for island hopping on foot, by bicycle or by car. The Helgeland Coast National Tourist Route (County Road 17) between Holm and Godøystraumen, with a side route to Torghatten, is 433 km long. There are several connections in to the E6 highway, making it easy to switch between partial sections of the tourist route and E6. Other stops along the route include Grønsvik Coastal Fort, Kilboghavn harbour, Forøy, Holand, the Reppen rest stop and the Kleivhalsen viewpoint. Another worthwhile stop is the viewpoint and memorial for the KNM Uredd submarine, on the border between Meløy and Gildeskål.
Overview map
More about the series
National Scenic Routes
This map series will enable some wonderful experiences along the selected routes.
The maps indicate spectacular views, nature experiences, attractions, architecture, dining spots, overnight accommodations and places of interest. These are described in the map with text and photos.
The maps have been designed in cooperation with the Norwegian Public Roads Administration.