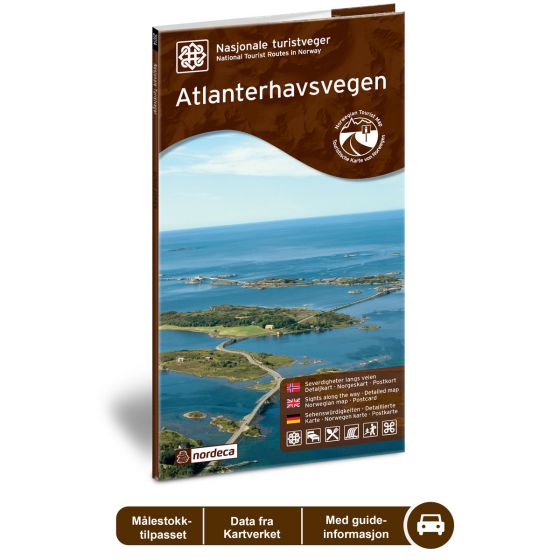 Details
Description
Atlanterhavsvegen - the Atlantic Ocean Road - is a good example of a successful coexistence between humans and nature. The seven bridges that connect islets and reefs out at sea is not only a beautiful sight, but also a work of creative engineering. The Atlantic Ocean Road was named the Best Norwegian Construction of the Century in 2005, and is considered the world’s most beautiful drive. The sea is the dominant experience on this route, which winds through a rich coastal cultural landscape along the barren Hustadvika, a challenging route for seafarers throughout the ages. The Aurlandsfjellet National Tourist Route between Aurlandsvangen and Lærdalsøyri is 36 km long (County Road 64/242/663/238/235).
Overview map
More about the series
National Scenic Routes
This map series will enable some wonderful experiences along the selected routes.
The maps indicate spectacular views, nature experiences, attractions, architecture, dining spots, overnight accommodations and places of interest. These are described in the map with text and photos.
The maps have been designed in cooperation with the Norwegian Public Roads Administration.